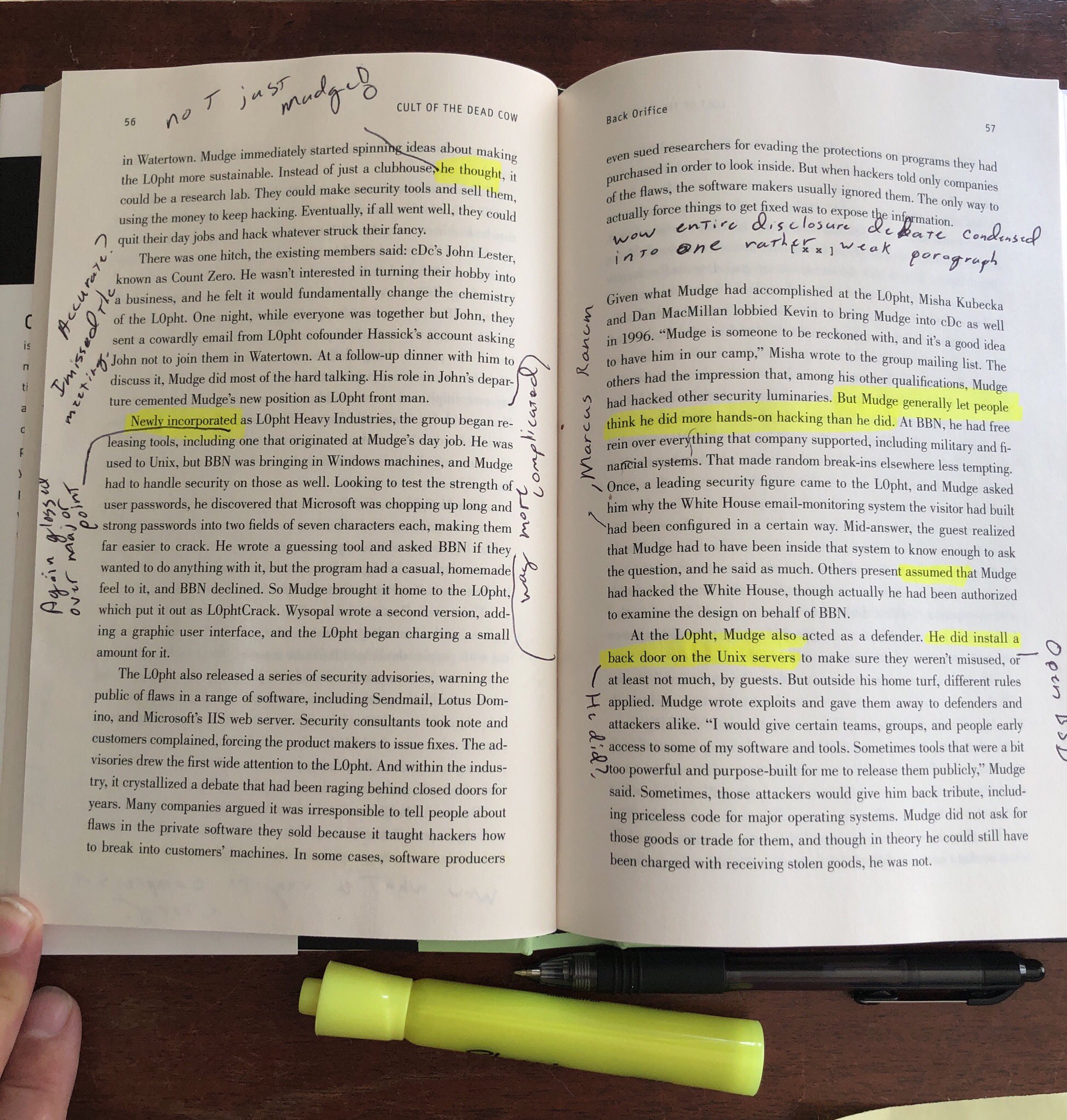 The NYTimes called “The Cult of the Dead Cow: How the Original Hacking SuperGroup Might Just Save the World” by Joseph Menn, a great piece of storytelling, and I will agree, it is definitely a story. This is not a history book. While I only found minor factual errors, that which can be attributed to twenty years of fog, the facts that have been used only tell part of the overall story and are used to paint the picture that Menn wants the reader to see. But this is the job of any good author, and Menn pulls it off masterfully. However, as someone who lived through and participated in many of the events mentioned in the book, actually reported on them at the time through my own news outlet, and was and still is close friends with many of the characters, I see Menn’s story for what it is, a story.

Anything written about the Cult of the Dead Cow that uses members of the group as its primary source material needs to understand the group’s history. For most of the group’s existence the cDc wasn’t really about hacking. Yes, the group existed online in the before time, in the long long ago, and so most of its members were very technically adept but the group wasn’t really about hacking. It’s all right there in the group’s publications, the t-files. There are a few early files that could be considered hacker related but for the most part they are shock value human interest pieces. The group was about public spectacle, at least that’s how it appeared to other non-member hackers. Just look at the huge productions made of the Defcon releases of Back Orifice and BO2K and of course the completely made up Hong Kong Blondes. Even one of the group’s taglines ‘global domination through media saturation’ suggests the group was just in it for the glory. Menn knows this as he calls the cDc a ‘performance art group’ (page 2), the ‘liberal arts section of the computer underground’ (12), ‘the arts wing of the hacking community’ (21), ‘successor to the Merry Pranksters’ (23), ‘more of a social space’ (25), ‘they were an enormous inside joke for hackers’ (47) etc… Menn knew that was cDc ‘playing with the media’ (58) and that they would ‘jam information to see how far out it would go’ (59). As such, and Menn alludes to this in the book obliquely, anything the group says to a reporter or an author needs to be taken with a grain of salt.

Menn seems to take liberty with which facts he includes and which ones he decides to omit or quickly gloss over. Obviously he can’t include everything or the book or it would easily be five or ten times longer and his big story would get lost in all the other little stories. But there are major important facts that should not only be included but expounded apon and explained in order to give a complete and accurate picture to the reader.

For example the transition of The L0pht from hobby space to LLC to VC backed firm didn’t just happen, it wasn’t just a one person idea. (56) It was a was a huge deal, It was not the first time a hacker group had tried to become a company but when you are the first legal LLC in the state and making the move from quasi underground organization to paying taxes I would think it warrants more of a mention than just ‘newly incorporated’ (56) Especially among other hackers where accusations of ‘sell out’ were often heard. Another important yet glossed over part of the story was the explusion of Count Zero. He wasn’t kicked out because he didn’t want to transition (56) but because he wasn’t respecting the space, not following the communal house rules, and kept mostly to himself.

Not only has Menn omitted major events, which admittedly could be simply an authors prerogative, he has confused the reader on more than one occasion. For example this book review was unable to distinguish between members of the Cult of the Dead Cow and members of the cDc Ninja Strike Force, which while closely aligned were two separate group’s. There is also an extreme blurring of lines between cDc and L0pht. Menn goes so far to label L0pht as the cDc’s East Coast base (59), despite later claiming that at least two cDc members (Veggie and FreqOut) (49) along with the group’s servers where on the other side of town at Messiah Village, which had nothing to do with The L0pht. Yes, cDc, Messiah Village, Hell House, Sin House, L0pht and others were all friends and knew each other (Boston was a glorious hacking place in the mid-late 90’s) but we were separate distinct group’s, Menn’s book seems to treat everyone as one large homogeneous cluster that happened to be in Boston and it was anything but.

Menn treats the entire Hong Kong Blondes debacle, which was pointed out as fake and labeled as a ‘media hack’ years ago, as some sort of glorified civil rights cause by Menn. That somehow lying to multiple news organizations for years to highlight human rights abuses (Menn isn’t clear as to how) was a just and moral thing. If such a thing happened today it would either be called Fake News or aired on FOX. It is unclear what good exactly came from these efforts and Menn does a poor job of explaining it to the reader. In fact if you read too quickly you may not even realize that this was anything more than an attention grab by cDc and that the HKBs had no basis in reality. I feel Menn does a serious disservice here by not flat out labelling the Hong Kong Blondes by what they actually were, lies.

I have criticized how other tech books have handled footnotes and I will do so again with Menn’s book for completely different reasons. In my review of Kim Zetter’s excellent book Countdown to Zero-Day I said that including the footnotes inline on every page detracted from the main story, especially when they took up half the page in a tiny font; for that book I would have preferred the footnotes at the end. The exact opposite is true for Menn’s book. There are key footnotes that Menn sticks in the back of the book because they don’t fit in nicely with his narrative. For example the footnote on the origin of hactivism (215). In the footnote Menn claims that previous research on the origin of the word is irrelevant and yet makes a major claim in the main text that cDc not only coined the term but attempted to popularize it. Additional research as to the origin of the word would seem appropriate to include in the main body of the text so that the reader can frame the ensuing paragraphs appropriately. Then in footnote 54 (218) Menn mentions that Mudge is prone to exaggeration. Mudge and I shared an apartment for a year, I heard all his stories more than once, I am intimately familiar with his story telling tendencies. (This is not a bad thing, they are great stories!) Considering that Mudge is Menn’s primary source for all the stuff about L0pht and features prominently in three chapters of the book it would seem that his tendency to tell tall tails would be important information that should be prominently shared with the reader and made it into the primary text, and not relegated to page 253.

There are numerous points throughout the book (as in several per page) where I remember things differently. In many cases what I feel are very relevant facts have been omitted and in others there are minor factual errors that impact the overall meaning. There are entire sections of the book that have little to nothing to do with The Cult of the Dead Cow, like the VC funding of L0pht, but are included anyway to support Menn’s overall story arc. I may try to go through and document each one of these if I can find the time, or I may not.

Much of this book dealt more with the L0pht than with cDc, and while there was some cross pollination we were two separate group’s each with its own accomplishments and goals. Unfortunately as a book about L0pht there just isn’t enough here, there are many more aspects to what the L0pht accomplished and did. Evidently Menn felt that large parts of the L0pht story are somehow relevant to cDc when they really aren’t. That being said this book is a very fun read, a fun romp through memory lane (even if the lane doesn’t follow my own memory exactly) and in the end it’s a great story. But it is just that, a story.