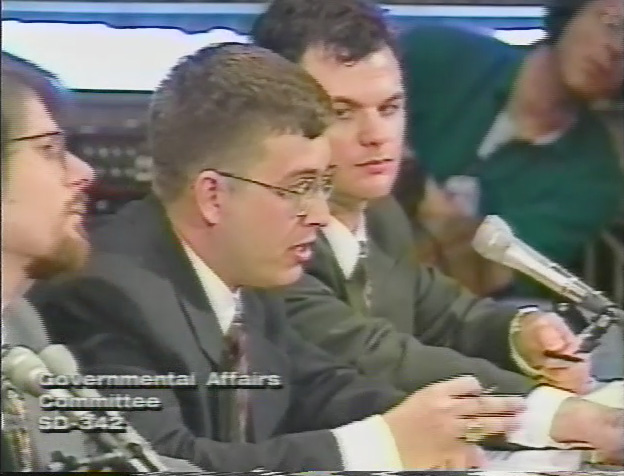 Senator Thompson: …If you gentlemen would come forward.. We’re joined today by the seven members of the L0pht, Hacker think Tank in Cambridge Massachusetts. Due to the sensitivity of the work done at the L0pht, they’ll be using their hacker names of; Mudge, Weld, Brian Oblivion, Kingpin, Space Rogue, Tan, and Stephen Von Neumann. Gentlemen…

Off Camera: I thought you were the Kingpin?
(Laughter)

Senator Thompson: I ah, I hope my grandkids don’t ask me who my witnesses were today, and say.. Space Rogue…

But we do, we do understand your — and do appreciate your being with us. Do you, ah, May I ask your name?

Senator: Mudge would you like to make a statement?

Mudge: Yes I would. Emmm! Thank you very much for having us here. We think this is hopefully a very great step forward and are thrilled that the government in general is, is starting to approach the hacker community, we think it’s a tremendous asset that the hackers bring to the table here, an understanding! Emm! My handle is Mudge and I and the six individuals seated before you, which we run down the line: Brian Oblivion, this is John Tan, King Pin, Weld Pun, Space Rogue, and Stephen Von Neumann… We make up the hacker group known as The L0pht. And for the last four years, the seven of us has been touted as just about everything, from The Hacker Conglomerate, The Hacker think tank, the hangout place for the top US hackers, Network security experts and the Consumer watch group. In reality, all we really are, is just Curious. For, well over the past decade, the seven of us have independently learned and worked in the fields of satellites communication, cryptography, operating systems’ design and implementation, computer network security, electronics and telecommunications.
To other learning process, we’ve made few waves with some large companies such as Microsoft, IBM, Novell, and Sun Microsystems. At the same time, the top hackers, and the top legitimate cryptographers, and computer security professionals pay us visits when they are in town, just to see what we’re currently working on.. so we kind of figured we must be doing something right.
I’d like to take the opportunity to let the various members talk about few of their various projects, their current projects and what they are going to be working on the future. Umm! Weld?